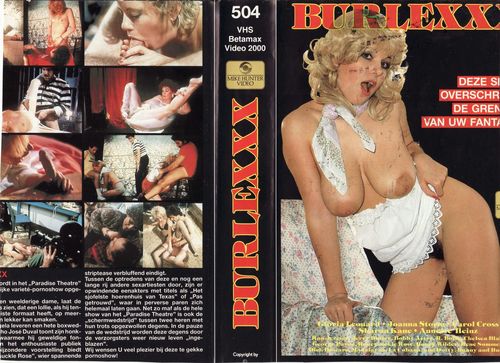 Starring: Chelsea Blake, George Payne, Carol Cross, Ron Jeremy, Samantha Fox, Annette Heinz, Joanna Storm, Dixie Dew, Honeysuckle Rose, Jose Duval, Robert Kerman, Bobby Astyr, Gloria Leonard, Sharon Kane, Honey Wilder
Description: It’s a re-creation of the burlesque shows of the 30’s and 40’s, but thanks to this being America in the 80’s, the performers can really Do It !
Of course, sex isn’t enough to make any picture a success. Fortunately, this one gives you much more.
Take Ron Jeremy, your Master of Ceremonies for the evening. He introduces all the acts, and even stars in a few of them. But what he mostly does is his comedy act that we’ve all heard so much about. And can you believe, he’s actually great with his clothes on!
There’s no sense trying to tell you everything that goes on in this truly remarkable XXX, but some of the high points are:
Dix Dew, the hottest strip teaser ever to cross the picture tube. What she does with a phallic-shaped lollipop and a champagne fountain, you wouldn’t believe. And when she gets the young fellows in the audience involved, her down-home style will take your breath away. She won’t have to ask if that’s a pickle in your pocket.
And then there’s the “cock fight” between Bobby Astyr and Ron Jeremy, with Sharon Kane and Annette Heinz cheering them on. Vaudeville was never like this . . . but it should have been!
Annette’s strip tease. Actually almost all of the actresses get a few minutes to take their clothes off as sexily as they know how (and boy do they know how!), but Annette’s act is really worth commenting on. I think it’s her smile: so innocent and shy – but her moves aren’t!