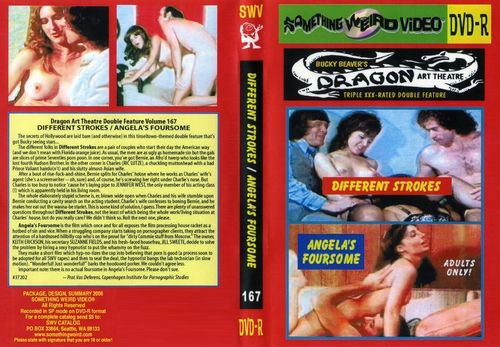 Starring: Jennifer West, Rick Lutze, Roger Scorpio
Description: The secrets of Hollywood are laid bare (and otherwise) in this tinseltown-themed double feature that’s got Bucky seeing stars.
The different folks in Different Strokes are a pair of couples who start their day the American way (and we don’t mean with Florida orange juice). As usual, the men are as ugly as homemade sin but the gals are slices of prime Seventies porn poon. In one corner, you’ve got Bernie, an Afro’d twerp who looks like the lost fourth Hudson Brother. In the other corner is Charles (Rick Lutze), a chuckling muttonhead with a bad Prince Valiant hairdo(n’t) and his slutty almost-Asian wife.
After a bout of rise-fuck-and-shine, Bernie splits for Charles’ house where he works as Charles’ wife’s agent (she’s a screenwriter – oh, sure) and, of course, he’s screwing her right under Charlie’s nose. But Charles is too busy to notice ’cause he’s laying pipe to Jennifer West, the only member of his acting class (!) which is apparently held in his living room.
The whole elaborately stupid scheme is, er, blown wide open when Charles and his wife stumble upon Bernie conducting a cavity search on the acting student. Charlie’s wife confesses to boning Bernie, and he makes her eat out the wanna-be starlet.This is some kind of solution, I guess. There are plenty of unanswered questions throughout Different Strokes, not the least of which being the whole work/living situation at Charles’ house, but do you really care? We didn’t think so. Roll the next one, please. 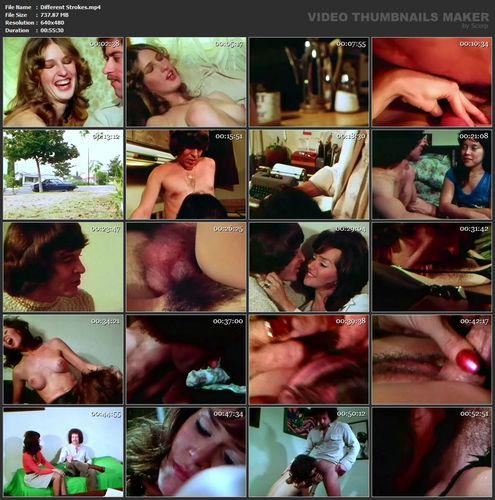