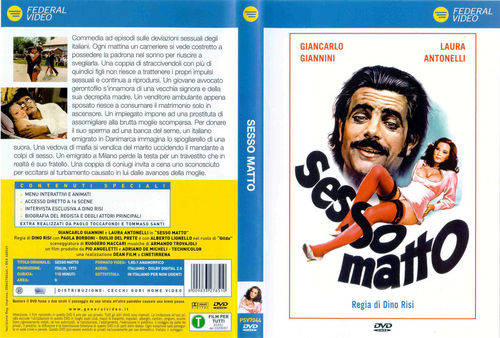 Alternative Title:
How Funny Can Sex Be?

Starring: Giancarlo Giannini, Laura Antonelli, Alberto Lionello, Duilio Del Prete, Paola Borboni, Carla Mancini, Patrizia Mauro, Lorenzo Piani, Cinzia Romanazzi, Franca Scagnetti
Description: SESSOMATTO is an episodic comedy in which Dino Risi generated a series of grotesque episodes concerning sexual deviations. The main actors are Laura Antonelli and Giancarlo Giannini.
In the first episode (Signora, sono le otto), a dutiful butler from Sicily has to make love with his mistress every morning in order to wake her from her deep coma-like slumber. In the second episode (Due cuori e una baracca) a very poor couple with 15 sons can’t control their outrageous sexual impulses and thus refrain from making even more babies. The third episode (Non e mai troppo tardi) describes the predicament of a lawyer with an irresistible desire for much older women, including one particularly elderly woman (and even her still older mother), and this obsession leaves alone and unsatisfied his young and sexy wife. The fourth episode (Viaggio di nozze) is the story of an itinerant merchant who, despite his “Don Giovanni” fame, can only succeed in sexually satisfying his wife in elevators. In the fifth episode (Torna piccina mia) a clerk forces a lovely prostitute to change her look in order that she closely resemble his ugly wife who had earlier left him for another man. In the sixth episode (Lavoratore italiano all’estero) we see an Italian emigrant in Denmark who, in order to successfully donate his seed to a sperm bank, vividly imagines a nun performing a lascivious striptease. The seventh (La vendetta) episode tells us about a young Mafia widow who, in order to avenge her husband’s murder, kills the author of the crime via the use of hours of non-stop, hard sex. In the eighth episode (Un amore difficile) a boy from the south of Italy falls in love with a transgender woman who, by the end of the movie, will reveal herself to have once been his brother. In the last episode (L’ospite) we see the funny story of a married couple who invite a guest (victim) to dinner with the perverse goal of being aroused by his perturbation when confronted with the very heated flirtations of the host-wife 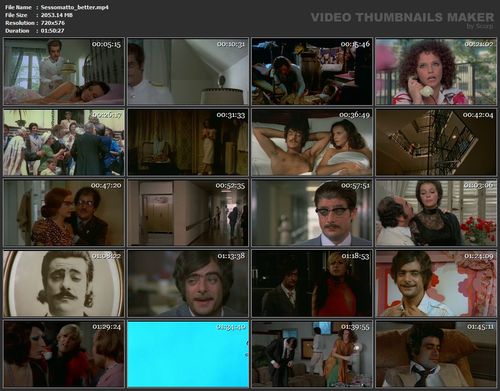